Just under one month ago, I moved to Toronto (or, well, the GTA) for a position with the Canadian Football League. This life change is best illustrated by the following screenshot from my phone’s mobile data useage: 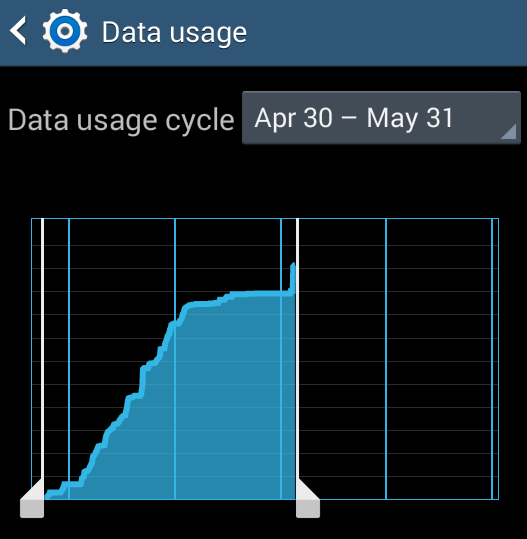 Yes, I burned through almost one month worth of data in the space of one week – that’s what happens when you get a job on a Thursday evening, move Sunday afternoon, and start work on a Wednesday. Thankfully I had a place to live, but it was going to take the Lovely WiFi People (as they are known) two weeks to set it up, and in the meantime I had to figure out how to navigate public transit in a new city, get my hockey scores, and stay in touch with people.

The high plateau in the above picture (unpopulated with yak as most high plateaux are) occurred when I began work and turned off my phone’s data whenever I was outside of the hallowed halls of WiFi. It spikes again when I start to get antsy about just how much I’m missing.

I’d been applying to jobs all over Canada for a while before I swung my vine into this one, but wasn’t entirely prepared for things to happen as quickly as they did. I had an incredible network in Ottawa: friends, a cozy apartment in a fantastic neighbourhood with a wonderful roommate, a rec soccer league, volunteer positions with festivals, and a hard-won familiarity with local transit (OC Transpo and I have had a turbulent relationship). I was loath to leave it, but as fond as I had become of Ottawa, there are so many other places in the world to live, and this is the time of my life when I can pick up and move to any place I’d like. It was time.

I can build that web anew in Toronto, and it’s nice that I’m not starting from scratch: I’ve got a great little cabal of friends here already, a place to live, and a vague-yet-menacing knowledge base of public transit. But I can’t deny I had it good. Last weekend I returned to Ottawa to pick up what I believed was the last of my belongings and what was actually enough schmodck (my mother’s word, a synonym of bumpf and schnorfl – also words of my mother’s – that means what you think it means) to fuel a life-size game of Tetris featuring boxes and a car. A group of friends gathered on a chilly patio (Canadians are nothing if not determined patio-goers) for a farewell party, and I already began to miss having them all at the tips of my fingers.

They’re still there, of course – I just have to reach a little further now. And I’m absolutely thrilled with my job (more on that in a later post, I’m sure) and the city. Even though it’s very un-Torontonian of me, I’ve always loved Toronto. (Shhh, don’t tell anyone, it’ll give me away.) Call it a symptom of growing up in Muskoka, where Toronto was The City, was Civilization, was The Place Where Things Happened. I’m excited to be here, and I can’t wait to get started.

Or, to quote one of my favourite vines (and an oft-reenacted one between my sisters and I):

“Quincy, we are goin’ on a road trip! Wooo! Yes! Absolutely!“

I’ll swap out Quincy for Leopold – oh hush, like you’ve never named a pet or an inanimate object – and a view of Highway 7.

One thought on “Absolutely!”